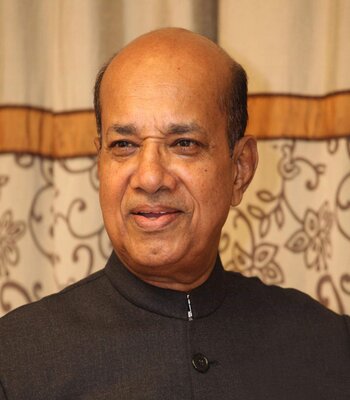 p g vargis was born in a remote village of South India. His father practised a synergistic faith of eastern orthodox Christianity and local forms of Hinduism. As a young man, p g vargis tried to find meaning in all kinds of religion, including flirtation with black magic. Disenchanted, he became an atheist. He soon began to indulge in various vices.

As a young man p g vargis joined the Indian army. Here he started to smoke about 120 cigarettes a day. He would begin his morning coffee mixed with rum, and would continue drinking till late night. Gambling, stealing and fights became common pg says, “I became a very hardened and cruel man. Borrowing Paul’s words, I too became a chief of sinners”.

A series of events led p g vargis to attend a tent-meeting. Here he heard the gospel preached clear and loud. He gave his life to Christ on the second night, and he experienced a powerful transformation. A new man, passionate to share Christ’s love and power began to quickly emerge.

Today, IET is one of the most effective pioneer mission forces in South Asia. It has birthed many church planting movements in various regions of South Asia. IET trains hundreds of indigenous men and women to be effective and godly church planters and Christian leaders through its regional Bible schools and the one accredited Bible Collage South Asia Leaders Training and Development Centre (SALT DC).

p g vargis travels and speaks all over the world. However, he spends more than half of his time travelling to the villages and fields in South Asia. He also leads one of IET’s regional church planting movement in M.P., one of the hardest and most resistant states in India. He has authored more than 68 books published in India and one in the United States. He was also awarded an honorary doctor of divinity degree and a doctor of literature. Lilly and P.G. Vargis have five children and all are married. He has nine grandchildren. Four children and their families are serving God full time in South Asia. Lilly and p g vargis now lives in Delhi, India