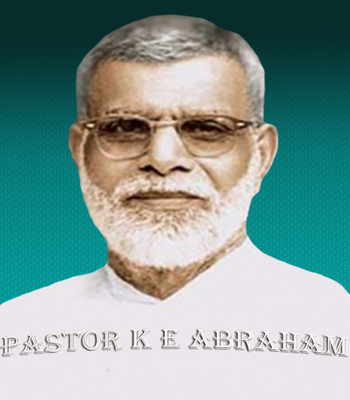 Pastor K. E. Abraham, founder of Indian Pentecostal Church of God, was born in 1st March 1899, in Puthencavu, near Chenganoor, in Kerala, India. His parents were members of the Syrian Orthodox Jacobite Church. At the age of 7 he was sent to a Marthomite Sunday School. From his young age he was saved and lived as a Son of God. In 1914, he dedicated his life to gospel work in a meeting conducted by Moothamplackal Kochukunju Upadesi. In 1915 after he passed his 7th class, he was appointed as a schoolteacher. He also began his gospel work at the same time. He was baptized in water on 27 February 1916 at the age of 17, and separated from the Jacobite Church. That same year, K. E. Abraham and later Mrs. K. E. Abraham resigned their teaching jobs.

As he understood the doctrine of the baptism of the Holy Spirit, he tarried for this and was baptized in the Spirit on 22 April 1923. Many dependent local churches were started in Kerala through the ministry of Pastor K. E. Abraham. In the beginning, they had no special name. When they faced the need for marriage registration, they chose the name “South Indian Pentecostal Church of God.”

Monthly fellowship meetings began in 1924. The first General Convention of the Church took place at Ranni, April 1-5, 1925. On 1 May 1930, Pastor K.E. Abraham and his family moved their residence from Mulakuzha to Kumbanad. Obeying the inspiration God gave him, K. E. Abraham started Hebron Bible School in June 1930. The work of the church began to spread in Kerala, Tamil Nadu, Andhra Pradesh, and North India. In 194, the name of the church was changed to “India Pentecostal Church of God”
Pastor K. E. Abraham and his co-workers began to travel into other Indian States, and finally outside India. He visited Sweden, Denmark, Norway, Germany, Belgium, France, England, Egypt, Israel, Lebanon, Syria, and the United States, among others, witnessing the gospel of Christ. His two sons Pastor T. S. Abraham and Pastor Oommen Abraham followed the footsteps of their father. During January 6-13, 1974, the 50th General Convention of the Church took place at Hebron, Kumbanad. Pastor K. E. Abraham was promoted to glory on 9 December 1974.