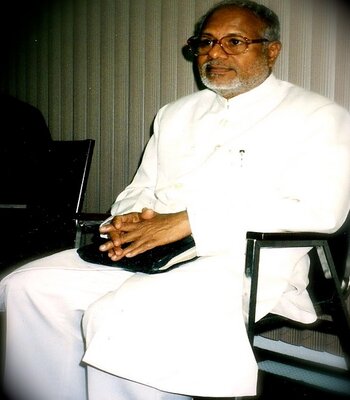 Pastor K. T. Thomas was born on 18 June 1927 to Idichandy Thomas and Dinamma at Kallissery, Kerala, India. He was a Brethren believer and had a close relation with the Malayalam Christian poet K. V. Simon. He worked for the Indian Army prior to his evangelical mission. On 8 May 1952, he married Marykutty and had four children namely Stanley (Raji), Benjamin (Saji), Susan (Suja), Samuel (Joji) and Persis (Gigi). In 1953, he was appointed as Central Secretariat in New Delhi, India. In 1956, under Pastor M.K.Chacko started his ministry at Karol Bagh, Delhi, India. In 1969, he formed the IPC Northern Region with other few church ministers. He died on 11 April 2011 after more than five decades of Christian ministry in northern India.

Apostle K.T. Thomas was born to Mr. Idichandi Thomas and Mrs. Dinamma at Kallissery in Kerala on 18th June, 1927. Though they were Brethren, his parents were devout believers in God and his mother a prayerful woman.

After matriculation, young Thomas joined the army without the consent of his loving father. Away from home in the army even though he learnt discipline in good measure, he could not know the living God nor had the desire or willingness to do so despite the opportunities. This self proclaimed atheist was living his life as he pleased. Living in the army, he was prone to alcohol and addictions. But his loving parents always stood in the gap for him before the Lord.

During the year 1947, he came face to face with death on three occasions. Once while serving on the area bordering Pakistan, a Pakistani supporter suddenly jumped before him threatening to kill him unless certain weapons were not handed over to him. But God saved him miraculously from the hands of the enemy. Again while at Ferozpur in Punjab, a dam was damaged and the water was gushing towards him and a group of personnel deputed on emergency duty in town. As they watched helplessly, suddenly a military truck arrived and saved him and the group of men with him.

The same night they were asleep in a building in the same town. A lot of people had fled for safer places, as a large number of houses had crumbled because of the strong currents in the town. Even though he and his group were in one of small buildings, god kept the building safe from crumbling down and protected them. But these nerve wrecking incidents also failed to rouse him from the aimless life he was leading.

He got married on the 8th of May, 1952, to Marykutty Koshy. Despite this happy moment, his life remained unchanged. But his life partner recognizing the destructive direction her husband was taking began interceding on his behalf with God.

“Thomas is just like a cigar burning from both the ends”, were the words in which his friend described him to another friend. True enough, he was leading a reckless life. At such a time, the death of his father came as a bitter shock. Being the eldest son, the responsibility of the family fell upon him. And he resented it.

In 1953, Thomas was posted in Delhi and life went on in the usual manner. In 1955, he brought his wife to Delhi and began his family life. His wife however kept fervently praying for him. On a particular day, he returned home very disturbed. All of a sudden his eyes laid on the Bible. As if mechanically, he took it and tried to read it. Until that time he didn’t have the slightest interest in the Bible. As he opened it, his eyes fell on Ephesians chapter two verse one- “As for you, you were dead in your transgressions and sins…” Soon his eyes were filled with tears. He soon got up, bolted the door from within and started weeping. The verse started working in his heart. He started asking himself: “Am I dead in my sins. Is there a God in reality? Is he really dealing with me now? That Sunday, Pastor M.K. Chacko who gave an altar-call asking “Is there anybody who wishes to declare his testimony?” Hearing this, Thomas stood on his feet as the Spirit of God lifted him up. “I am a sinner”, he cried out loudly. The whole congregation was moved and they started praising God in tears. Thus on the 1st of July 1956, he accepted the Lord as his personal saviour and got saved. Immediately he began sharing about the Saviour’s love to all around him. Slowly convinced of obedience of water baptism in the light of the word of God, he approached Pr. M. K. Chacko. Accordingly he was baptized on the 29th of July, 1956.

He did not receive the Holy Spirit until 19th Oct 1961, when after several days of fasting, God baptized in him in the Holy Spirit. He felt a lightness in his spirit and an immeasurable joy that flooded his heart.

He was passionately engaged in the ministry under the servants of God – Pastor M.K Chacko, Pastor P.M. Samuel among others .God enabled him to start churches and prayer groups in Faridabad, Ghaziabad, Motibagh, Indirapuram, Cantonment & East Kidwai Nagar areas of Delhi. In the worship meeting at the residence of the servant God at Motibagh a great gathering