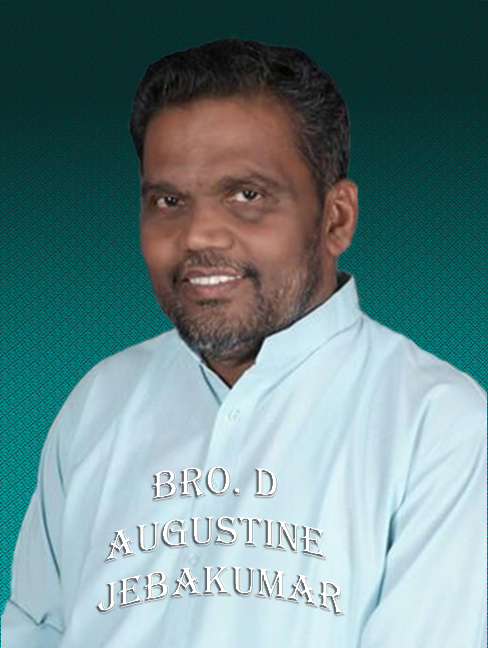 Bro. D. Augustine Jebakumar was born on 20th August 1946 in a simple Christian Family in the town of Tuticorin in South India. After taking a Diploma in Mechanical Engineering, he started working in the English Electric Co., at Chennai.

Augustine Jebakumar, at the age of 21, he enthusiastically got involved in street preaching and child evangelism and was working mainly among street children. It was in the year 1972 that he had an encounter with the Lord through a vision, which made him resign his job and completely surrender to the clarion call of the Lord with implicit obedience. He then came to Bihar, a State that was known as the “Graveyard of Missionaries”. He undertook his missionary journey with great challenge and landed in Bihar soil on 13th October 1972 without knowing the language and culture of the State. The Lord took him in different paths and used him to establish the ministry under the banner of Gospel Echoing Missionary Society (GEMS), now working in the States of Bihar, Utter Pradesh, Madhya Pradesh, Jharkand, Nepal and Maharastra, with a band of 1597± workers.

His major role in the Kingdom of God is reviving the churches and reaching the unreached with the love of Christ. He travels extensively.