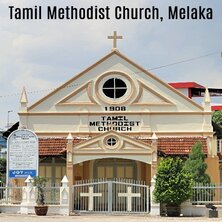 The church was built in 1908 and initially known as Kubu Methodist Church. As the congregation grew bigger, space became an issue. In 1954, the Peranakans and English-speaking expatriates built a new church at Tengkera Street. In 1955, Mandarin-speaking Methodist moved to their own church at Tan Chay Yan Street, leaving the church to become the spiritual home for Tamil and English-speaking congregation.