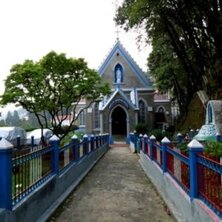 The foundation stone of the Immaculate Conception Church was set by Archbishop Goethals in the year 1892. This wonderful church of 113 feet by 28 feet with oratories on both the sides of the reserve is a unique beauty in the region.

Immaculate Conception Church was under the rustic care of the Belgium Jesuits. After sixty years in the year 1947, the Belgium Jesuits handed over this Catholic Mission to Canadian Jesuits. Today it is worth exploring where travelers visit and so do they worship there.

The first baptism was given to Ms Agnes Margaret on 3rd November 1846, by Fr John McGirr after 24 days of his coming to Darjeeling. This is revealed by the records available with the Parish register. Sunday services were conducted in the chapel of Loreto Convent until 1884. The first stone for a public place of worship was laid on 19th May 1884 near St. Joseph’s seminary, Sunny Bank, by the Capuchin fathers.

In 1892, Archbishop Goethals laid the foundation stone of the church of the Immaculate Conception. The construction was supervised by Bro.Eugene Rotsaert. It is 113 feet by 28 feet with oratories on both sides of the sanctuary.

The Catholic community grew in number under pastoral care of Belgium Jesuits.Fr Alphonse Scharlaeken, a Belgium Jesuit took keen interest in Lepcha people and he prepared a Catechism book in Lepcha script. He was also instrumental in attracting Nepali people to Catholic faith. After sixty or so years of serving the Mission the Belgium Jesuits handed over the Catholic Mission of Darjeeling to Canadian Jesuits in 1947. Fr John Prendergast, was the first Canadian Jesuit to be installed as the Parish Priest of Immaculate Conception Church, Darjeeling.

In 1954, the Parish was handed over to Fr Eric Benjamin, a local Catholic Priest. Since then, the spiritual leadership of the Church has been with the hands of Indian Priests. Fr Samuel Lepcha, is the present Parish Priest of the Immaculate Conception Church, Darjeeling.