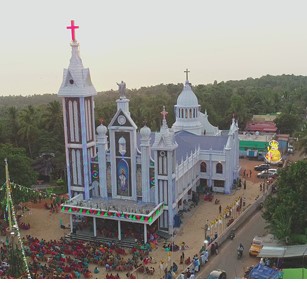 Alanchy was not a place to be lived in. It was full of bushes and thorns, filled with palm trees. One could find little ponds here and there. Since it is nearby sea shore, a soothing breeze was flowing in. The whole village was spread with the presence of Hindu Nayars who were the landlords, occupying the resources of the village. The Nadar community which is considered as backward class was slave to Nayars toiling in the lands. Some in the Nadar community were the palm climbers, extracting palm juice to make palm cake by which they made their both ends meet. The places can be particularized where the Nadar community was living in the village, namely Pothiyan vilai, Adapoor, Kudal vilai and Ezhuvilaipattu. The life situation of this community was pathetic due to the suppression by Nayars and the poverty they underwent. These had an impact on their health and belief.

The first church in Alanchy was built by Portuguese masons since the art of building a church was unknown to the local people. The first church was engulfed with fine arts and architectures. It was just below the present altar having five steps deep down. The roof of the church was made of gothic culture. There were three statues namely Mother Mary, St. Francis Xavier and St. Ignatius placed on the altar. Those two statues mother Mary and St. Francis Xavier that are placed in the present church that made of wood. There was an art of depicting Abraham trying to offer Isaac drawn at the wall of the altar. Inside the church too there were fine arts that were very attractive and appealing. After the erection of the new church, there was a need for a priest to serve the faithful especially for those who were found in Kalimar, Kandarvilagam, Panavilai, Ravilai, Saletnagar, Chentharai, Ezhuvilaipattu, Adapoor, Neervakuzhi, Kadamankuzhi, Pothiyanvilai, Paravilai and those people around the church. Therefore, a parochial house was built in the southern part of the church that was touching the church building too. This was furnished with wood having two stories.

Since the old church was small, the number of the families was increasing day by day and the promise made to the bishop to build a new church, people took an initiative to do that. However, they did not want to demolish the artistically built church which was beautiful and small. Therefore, they built a new church around the previous one that is still there under the altar of the present-day church. The newly built church which was in a cross shape was the sweat of the local people digging a deep bit for the basement, laying huge stones under. They contributed a lot in the form of labor, providing palm juice to mix the clay, offering wood for furniture works. Those days there were no stone quarries, no vehicle facilities, they had to carry the stone from faraway places on head. The local people went to Thundam, Thammam (Pariakal) to carry.