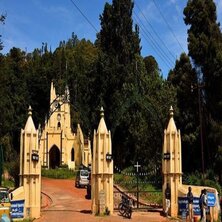 Holy Trinity Church is located in Ooty (Ootacamund), in the state of Tamil Nadu. It is one of the oldest landmarks in Ooty. The building was initially used by Indian Christians as a place of worship on Sundays and used as a school during weekdays. It became a dedicated church from 1858.

Ministry to the Native Indians were started as early as 1830. The first Tamil church which was dedicated in year 1858 due to efforts of missionaries, chief among them was Rev.G.U.POPE, a Tamil scholar. The pastorate has grown to 700 families with nine other branch churches including two TODA believers congregation.Last year 150th anniversary was celebrated.